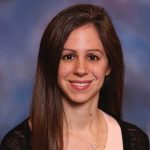 Characterized by hepatocellular triglyceride accumulation in the absence of significant alcohol consumption, NAFLD is the most common liver disease in the U.S., with an estimated prevalence of 30% (1). NAFLD is associated with obesity and metabolic syndrome, and is an independent risk factor for coronary artery disease. NAFLD also may progress to cirrhosis or hepatocellular carcinoma, and is expected to surpass hepatitis C as the principal indication for liver transplantation within the next decade (2). Despite its growing threat to public health, the pathogenesis and effective management of NAFLD remain poorly understood. There also is no approved pharmacologic intervention for NAFLD with treatment recommendations focused on lifestyle modification, which may be difficult to achieve (3).

Pituitary growth hormone (GH) deficiency is characterized by enhanced visceral adiposity, reduced lean body mass, and dyslipidemia. Recent evidence also suggests that GH deficiency is a risk factor for NAFLD. In one case-control study, the prevalence of NAFLD was a striking 77% among consecutive patients with GH deficiency, which constituted a 6.4-fold increase compared to controls matched for age, sex, and BMI. Notably, in this study, treatment of a small subset of these individuals with GH led to a reduction in steatosis and fibrosis on liver biopsy (4). Relatedly, mice with liver-specific knockout of the GH receptor demonstrated increased liver fat and inflammation. These mice further demonstrated significant perturbations in lipid metabolism as characterized by upregulation of genes involved in hepatic lipid uptake and de novo lipogenesis. In this prior study, restoration of hepatic insulin-like growth factor 1 (IGF-1) expression only partially reversed the NAFLD phenotype, suggesting contributions of both components of the GH/IGF-1 axis to the pathogenesis of this disease (5).

Given the role of GH in abdominal and hepatic fat accumulation among patients with hypopituitarism, our group and others have sought to understand whether individuals with abdominal obesity may exhibit perturbed GH secretion in the absence of known pituitary disease. Our work in this area has primarily focused on the HIV population given the predisposition toward abdominal fat accumulation among these patients (6). In a detailed physiology study, we found that individuals with HIV-associated abdominal adiposity demonstrated intact GH pulsatility but diminished pulse amplitude as measured by frequent overnight sampling. Mean GH levels among these subjects inversely correlated with visceral fat content (7). Mechanistically, individuals with abdominal obesity were found to have elevated circulating free fatty acids, increased somatostatin tone, and reduced ghrelin levels, which collectively acted to inhibit central GH secretion (8). Blunted GH secretion in the context of obesity serves as an important caveat to dynamic testing for GH deficiency, and as a consequence a higher threshold to diagnose GH deficiency in patients with pituitary disease and higher BMI has been advised (9). Nonetheless, relative GH deficiency among patients with obesity, even in the absence of true pituitary disease, may have important clinical consequences. Accordingly, growing evidence suggests that GH/IGF-1 is inversely associated with hepatic fat content, systemic inflammation, and vascular disease among populations with abdominal fat accumulation (10-12), akin to findings in patients with hypopituitarism.

As a strategy to restore normal GH pulse dynamics among individuals with abdominal fat accumulation with intact pituitary function, our group employed the growth hormone-releasing hormone (GHRH) analogue, tesamorelin. GHRH analogue therapy offers several putative advantages to exogenous GH by allowing GH secretion to remain under the regulation of the pituitary gland. As such, GH pulsatility remains intact, consistent with normal physiology, which may have critical implications for GH action (13). GH secretion also remains under the influence of negative feedback by IGF-1, which minimizes the risk of iatrogenic GH/IGF-1 excess. In two large Phase III studies among individuals with HIV and abdominal fat accumulation, tesamorelin was found to selectively reduce visceral fat by an estimated 15% over 26 weeks without substantially altering subcutaneous fat. Notably, tesamorelin also decreased serum triglycerides and preserved glucose homeostasis (14). As such, tesamorelin was FDA approved in 2010 for the treatment of abdominal fat accumulation in HIV. A randomized controlled trial in the non-HIV obese population demonstrated similar effects (15). 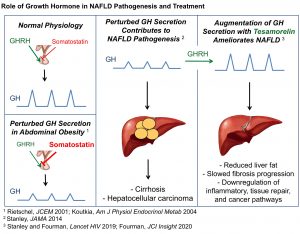 Based on the role of GH in NAFLD pathogenesis, we recently hypothesized that augmentation of endogenous GH pulsatility with tesamorelin may ameliorate NAFLD. Accordingly, we randomized 61 individuals with HIV-associated NAFLD based on hepatic fat fraction ≥ 5% in the absence of other causes of hepatic steatosis to either tesamorelin or identical placebo for 1 year. Body composition or growth hormone parameters were not criteria for enrollment. We found that tesamorelin led to a -37% (95% CI -67 to -7) relative change in hepatic fat fraction. Relatedly, 35% of individuals assigned to tesamorelin had resolution of NAFLD over the course of the study compared to 4% of individuals assigned to placebo (p = 0.0069). Importantly, we also found that tesamorelin prevented progression of fibrosis; over the study period, 10.5% of individuals in the tesamorelin arm showed an increase in fibrosis stage versus 37.5% of individuals receiving placebo (p = 0.044). Given that hepatic fibrosis is a major predictor of liver-specific and all-cause mortality, these findings have exciting implications for prognosis in patients with HIV-associated NAFLD (16). As in the Phase 3 studies of abdominal obesity, tesamorelin was well tolerated with neutral effects of blood glucose. A randomized placebo-controlled trial is now underway to study the effects of tesamorelin on NAFLD among individuals without known HIV infection (NCT03375788).

To enhance our knowledge of the effects of augmented pulsatile GH secretion on hepatic physiology in NAFLD, we leveraged paired liver biopsy specimens from our recent clinical trial to investigate differential changes in hepatic gene expression by tesamorelin versus placebo over one year. Using gene set enrichment analysis, we found that tesamorelin increased hepatic expression of gene sets involved in oxidative phosphorylation, and decreased hepatic expression of gene sets contributing to inflammation, tissue repair, and cell division. Tesamorelin also reciprocally up- and downregulated gene sets associated with favorable and poor hepatocellular carcinoma prognosis, respectively. Importantly, among tesamorelin-treated participants, these changes in hepatic expression correlated with improved fibrosis as measured by a previously validated gene score (17). Further building on this work, we recently performed a focused proteomic analysis of top leading edge genes within differentially modulated gene sets. Using this approach, we showed that GH axis augmentation had novel effects to reduce circulating levels of key angiogenic, pro-inflammatory, and fibrogenic mediators in association with an improvement in NAFLD activity among our participants with HIV-associated NAFLD (18).

While NAFLD remains an enigmatic disease, growing evidence suggests a role for GH in its pathogenesis and treatment. In patients with GH deficiency and hypopituitarism, data clearly indicate a heightened susceptibility to NAFLD. As such, it may be appropriate to screen such patients for this comorbidity and to strongly consider GH replacement in those found to have the condition. Furthermore, even in patients without pituitary disease, functional GH deficiency in the context of abdominal adiposity may be an important contributor to NAFLD pathogenesis. Importantly, our recent data in HIV suggest that augmentation of endogenous GH secretion with the GHRH analogue tesamorelin ameliorates the clinical course of NAFLD, reducing not only liver fat but also fibrosis progression, and has broad effects on hepatic gene expression signatures. Thus, observations from patients with hypopituitarism have translated to advances in the obesity arena, revealing that functional defects in GH secretion among individuals with abdominal obesity may be pharmacologically targeted for treatment of metabolic comorbidities.