Historical Case Presentation
A 20 year old male underwent head imaging to evaluate headaches. Incidentally, he was found to have a macroprolactinoma and underwent a transsphenoidal resection for initial treatment. After this transsphenoidal resection, bromocriptine became available for use and he was subsequently initiated on dopamine agonist therapy for his hyperprolactinemia and residual tumor. He did not have a history of psychiatric disease prior to initiation of medical therapy. He eventually was transitioned from bromocriptine to cabergoline after transferring his endocrine care to a different provider. After several years on cabergoline, he began to notice increased gambling and hypersexuality as well as depressed mood. These behaviors began to affect his marriage, at which time he discussed them with his endocrinologist. His cabergoline dose was subsequently reduced; and after this reduction, the gambling and hypersexuality behaviors resolved and his mood improved. Despite resolution of these behaviors, these symptoms contributed the eventual dissolution of his marriage.

Case Commentary
This patient presented in the 1970s, just prior to the availability of bromocriptine for hyperprolactinemia; thus surgery was the initial treatment. Note that if we were managing the patient at the time he first experienced an impulse control disorder, the dopamine agonist would have been discontinued, as this provides the highest likelihood of symptom resolution.

What are impulse control disorders?
Impulse control disorders (ICDs) include a class of psychiatric conditions characterized by impulsivity such as pathological gambling, hypersexuality, compulsive shopping and/or eating, and punding (repetitive mechanical tasks such as assembling objects). (1-2) ICDs have been reported with the use of dopamine agonists (DAs) in a variety of clinical settings including in the treatment of Parkinson’s disease (3-4) and restless leg syndrome. (5) More recently, ICDs are described among patients being treated with DAs for prolactinomas and hyperprolactinemia, conditions where the doses of DAs tend to be lower than those used in the treatment of Parkinson’s disease.(6) The presence of these behaviors in the setting of DA therapy is thought to be related to stimulation of the mesolimbic dopamine receptors in the central dopaminergic reward system. (4) As with the patient in the case above, ICDs can have a significant economic, health, and social impact on patient lives.

What have studies on impulse control disorders in the setting of DA for treatment of prolactinomas and/or hyperprolactinemia demonstrated?
In Martinkova et al., investigators reviewed the cases of 20 patients who were consecutively seen in 2009 by an endocrinologist for treatment of a pituitary adenoma using a DA and underwent a Minnesota Impulse Disorder Interview (MIDI) focusing on ICDs. (7) Patients were classified as having ICDs according to Diagnostic and Statistical Manual of Mental Disorders, Fourth Edition (DSM-IV) criteria. Two of the 20 patients being treated with a DA were classified as having an ICD. One of these patients developed compulsive eating on bromocriptine, leading to a 20kg weight gain and later developed compulsive gambling after being switched to cabergoline. He eventually underwent partial resection of his pituitary adenoma and radiation therapy and was maintained on a lower dose of cabergoline. The second patient developed hypersexuality while on bromocriptine 15mg daily; with evidence of a decrease in the size of his pituitary adenoma, his bromocriptine dose was reduced, resulting in a reduction in his hypersexuality. In both of these cases, the ICD negatively impacted their personal lives. Moreover, in one of the patients, the behaviors continued even after switching to a different dopamine agonist. The patients also appeared to exhibit the behaviors in a dose dependent manner, such that at lower doses they exhibited these behaviors less. 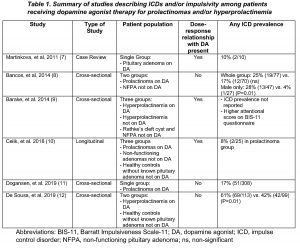 In a cross-sectional study, Bancos et al., compared the frequency of ICDs among patients with prolactinomas and past or current use of a DA versus patients with non-functioning pituitary adenomas (NFPAs) and no history of DA use. (8) Participants underwent a hypersexuality questionnaire, MIDI, modified South Oaks Gambling Screen, and punding questionnaire. In this study, males with prolactinomas on DA were found to be close to ten times more likely to develop an ICD compared to males with NFPAs who were not on a DA. In different study performed by Barake et al. at the Neuroendocrine and Pituitary Tumor Clinical Center at Massachusetts General Hospital, investigators compared indices of impulsivity between 3 different groups – hyperprolactinemia patients on DA therapy, hyperprolactinemia patients not on DAs, and normoprolactinemic patients with presumed Rathke’s cleft cyst or NFPA. (9) Patients underwent a Behavioral Inhibition/ Activation System (BIS/BAS) questionnaire and the Barratt Impulsiveness Scale (BIS-11). Higher scores on the attention subscale of the BIS-11 were found among the hyperprolactinemic patients on a DA compared to the hyperprolactinemic patients not on a DA and the normoprolactinemic group. Moreover, there was a direct relationship between increased impulsivity and weekly cabergoline dose.

In a prospective, longitudinal study performed at Cerrahpasa Medical School in Istanbul, Turkey by Celik et al., participants underwent screening for the presence of ICDs by completion of a revised MIDI, Symptom Checklist (SCL-90-R) questionnaire, BIS, Beck Depression Inventory (BIDI), and Beck Anxiety Inventory (BAI). (10) Participants who were suspected of having an ICD based on these questionnaires underwent further evaluation by psychiatrists. This evaluation was repeated for participants on DAs at the 3rd and 12th month of drug therapy. In addition to a cohort of participants with prolactinomas that were on DAs, this study also included a cohort of participants with NFPAs not on a DA and healthy controls not on a DA. Participants with past or current ICDs or major psychiatric or mental disorders were excluded. Two patients on DA (8% of those in the prolactinoma group) developed an ICD associated with hypersexuality which stopped or was reduced with discontinuation of the DA. Additionally, the cumulative DA dose was directly related to several components of the SCL-90-R, including obsession, interpersonal sensitivity, paranoid ideation, hostility, and phobic anxiety subscales but not with the development of an ICD. The exclusion of participants with a history of past or current ICDs or major psychiatric disorder in this study may have affected the incidence of ICDs found in this particular study.

More recently, in a cross-sectional multicenter study, Dogansen et al. found that 17% of patients with prolactinomas on DAs for at least 3 month had at least one ICD. (11) In this particular study, the presence of an ICD was ascertained using section 1 of the Questionnaire for Impulse-Compulsive Disorders in Parkinson’s disease (QUIP) and the BIS-11. The prevalence of any ICD varied with respect to follow-up period (35% in patients with follow-up period ≤ 12 months vs. 11% in patients with a follow-up period > 12 months), whereas the type of ICD varied by sex with hypersexuality being more common among male patients and compulsive shopping being more prevalent among female patients. While this study did not include a group of control participants, a more recent study by De Sousa et al. investigated ICD prevalence among hyperprolactinemic patients on DA versus healthy controls. (12) The presence of an ICD was determined by several questionnaires, including the Depression Anxiety Stress Scale (DASS21), a shortened version of the QUIP (QUIP-S), Hypersexual Behavior Inventory (HBI), Hypersexual Behavior Consequences Scale (HBCS), and Social Desirability Response Set Scale (SDR55). Patients treated with DA were more likely to have any ICD (based on the QUIP-S) compared to controls (61.1 vs 42.4%). In particular, there was an increased prevalence of hypersexuality, compulsive buying, and punding among patients treated with DA compared to controls. This study had a higher prevalence of ICD as compared to prior studies. One possible reason for this is that unlike prior studies such as Celik et al., this study did not exclude participants with a history of ICD or other major psychiatric disorder. Moreover, investigators also found several independent predictors of an ICD, including male sex, eugonadism, and psychiatric comorbidity; DA dose, however, was not found to be predictive of ICD. Notably, higher testosterone levels at baseline conferred a trend toward a higher risk of hypersexuality, suggesting that the development of hypersexuality in men receiving DA is not related solely to improvements in testosterone levels with treatment of their hyperprolactinemia.

Implications for patients on dopamine agonists
These studies imply that DAs may contribute to the development of ICD among patients receiving this class of medications for prolactinomas and hyperprolactinemia. While doses of DA used to treat these conditions are lower than those used to treat diseases such as Parkinson’s, patients on DAs for these neuroendocrine indications may still exhibit ICDs even without known prior psychiatric disease. Because ICDs can be extremely serious, and there are other treatment options for prolactin disorders, we strongly advise discontinuation of DAs if ICDs develop. While discontinuation of DA therapy typically leads to cessation or a decrease in the behaviors seen with an ICD, the development of an ICD in these patients can still have significant life-long effects on a patient’s personal life as exemplified by the patient case above. Currently, there are no standardized guidelines for screening for ICDs in patients who are on or will be initiated on DA therapy for prolactinomas and/or hyperprolactinemia. Further studies will be needed for the development of these standardized guidelines. While these studies are being developed, increasing the awareness of the potential for ICDs with DA therapy will be important for both the physicians who educate and counsel their patients about impulsivity with dopamine agonists and the patients who are currently on or will be initiated on such therapy.