Background
Immune checkpoint inhibitors (CPIs) have transformed the landscape of oncology since the approval of ipilimumab by the US Food and Drug Administration in 2011. Eighteen cancer types are currently approved for treatment with 7 CPIs (ipilimumab, nivolumab, pembrolizumab, cemiplimab, atezolizumab, durvalumab, and avelumab). A recent study estimated that almost half of all patients with cancer in the United States are eligible for treatment with CPIs, a proportion far outweighing those eligible for genome-targeted therapies (1-2).

Ipilimumab is an IgG1-based monoclonal antibody. Canonically, its effects are mediated through the inhibition of cytotoxic T-lymphocyte antigen-4 (CTLA-4) on activated T cells. CTLA-4 competitively binds B7 to block costimulation and thereby downregulates T cell activation and proliferation, acting as a brake on the immune response. Nivolumab, pembrolizumab, and cemiplimab are IgG4-based monoclonal antibodies targeting programmed cell death 1 (PD-1). Atezolizumab, durvalumab, and avelumab are IgG1-based monoclonal antibodies that inhibit programmed death-ligand 1 (PD-L1). PD-1 is expressed by activated T and B lymphocytes and monocytes; PD-L1 is found on antigen-presenting cells and many other cell types. Binding of PD-1 to PD-L1 inhibits the immune response of these cells primarily at the level of the tumor microenvironment (3-4). Tumoral expression of PD-L1 and/or PD-L2 can act as a mechanism of evasion from immune surveillance.

Immune-related adverse events (irAE) occur in some patients as sequelae from CPI treatment and can involve any organ system. Potential endocrine irAEs include hypophysitis, primary hypothyroidism with or without destructive thyroiditis and temporary thyrotoxicosis, hyperthyroidism due to Graves disease, diabetes mellitus, primary adrenal insufficiency (AI), and hypoparathyroidism. Primary hypophysitis is a rare disorder with an estimated annual incidence of 1 in 7-9 million (5), and it accounts for less than one percent of pituitary surgery cases (6-10). Hypophysitis secondary to CPIs is a recently recognized clinical entity and has likely become the most frequent etiology for new hypophysitis cases.

Figure 1. Time (weeks) from the onset of therapy until the diagnosis of hypophysitis for patients treated with anti-PD-1 monotherapy (Panel A), ipilimumab monotherapy (Panel B) and ipilimumab plus concurrent nivolumab (Panel C). Reproduced with permission from Faje et al., European Journal of Endocrinology, 2019 (13).

No case of CPI-associated hypophysitis has been confirmed by surgical biopsy. An autopsy specimen has been described from a single case of tremelimumab-associated hypophysitis (tremelimumab is an IgG2-based anti-CTLA-4 antibody) (20). Clinical diagnoses of CPI-associated hypophysitis are based on the presence of new hypopituitarism and/or new reversible radiographic pituitary enlargement following treatment with CPIs in the absence of an alternative etiology. A serial decline in TSH values may precede the onset of ipilimumab-associated hypophysitis (19,21), and radiographic changes may also occur before the onset of clinical symptoms in these patients (14). Pituitary gland enlargement is generally mild, rarely compresses the optic apparatus, and may only be appreciated in some cases after comparison with prior imaging (19). Gland enlargement exists for only a brief time in some patients and may be missed if imaging is delayed (Figure 2) (22). Pituitary function test results may be influenced by factors such as recent or current exogenous glucocorticoid use, chronic illness and associated factors such as nutritional status, and/or the presence of an additional endocrine irAE in some patients. Due to the nonspecific character of their presenting symptoms, the frequent lack of localizing features, and typically negative imaging findings, diagnosis may be particularly challenging in anti-PD-1 hypophysitis cases; awareness is key.

Central AI appears to be permanent in nearly all patients with CPI-associated hypophysitis. Other hormonal axes may recover in some patients (13,19,22). Treatment of central hypothyroidism with thyroid hormone replacement is appropriate at the time of diagnosis. Thyroid hormone weaning/withdrawal may be attempted at a future date in suitable patients. Gonadal hormone replacement can be deferred initially if appropriate in order to assess for potential axis recovery. Growth hormone replacement is contraindicated in patients with CPI-associated hypophysitis due to the underlying malignancy.

Mechanism of CPI-associated Hypophysitis and Potential Therapeutic Application
Ipilimumab-associated hypophysitis may occur secondary to direct drug binding and targeting of the pituitary gland. CTLA-4 is expressed by anterior pituitary cells in mice and humans. CTLA-4 expression levels in humans appear to be highly variable (20,34-35). Experiments in vitro with a melanoma cell line and ex vivo with T regulatory cells have demonstrated that ipilimumab can activate antibody-dependent cellular cytotoxicity (36-37). Mice injected with anti-CTLA-4 antibody show activation of the classical complement pathway and complement deposition onto anterior pituitary cells. In the previously noted autopsy case of tremelimumab-associated hypophysitis, the patient had a high expression level of CTLA-4 in the anterior pituitary, evidence of IgG2 binding, complement deposition, abundant macrophage infiltration as well as T and B cells consistent with type II and IV hypersensitivity reactions, and a lack of posterior pituitary gland involvement (consistent with the lack of diabetes insipidus observed in CPI-associated hypophysitis patients) (20,34). Coherent with the hypothesis that drug binding to anterior pituitary cells is important for the development of ipilimumab-associated hypophysitis, 2 studies of 25 patients with germline CTLA-4 mutations reported the presence of multiple severe autoimmune diseases but no case of hypophysitis/hypopituitarism (38-39). It is unknown whether PD-1 is expressed by pituitary cells. Regardless, anti-PD-1 medications are IgG4-based antibodies, which have a poor ability to bind complement and activate Fc receptor subtypes (40-41). The anti-PD-L1 medications atezolizumab and durvalumab cannot effectively bind Fc receptors or complement due to modified Fc domains. 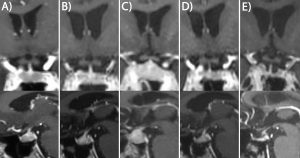 Figure 2. Images from a patient with ipilimumab-associated hypophysitis. Radiographic pituitary gland enlargement developed over a 4-day period and resolved equally quickly followed by a gradual evolution to a nearly empty sella. Panels A) Prior to treatment with ipilimumab, B) 4 days prior to the diagnosis of hypophysitis, C) hypophysitis showing gland enlargement, D) 4 days after diagnosis, E) 19 weeks post-diagnosis. Adapted from Faje et al., Cancer 2018 (22).

The possibility that ipilimumab may directly target pituitary tissue suggests that the off-target effect of hypophysitis could potentially be harnessed for therapeutic treatment of selected aggressive pituitary tumors and carcinomas (19). In a recent case report, combination therapy with ipilimumab plus nivolumab was successfully utilized in the treatment of an ACTH-secreting pituitary carcinoma (42). Tumor mutational burden is correlated with response rates for ipilimumab and anti-PD-1 therapy within individual cancer types and across different malignancies (43-46). The authors of the case report hypothesized that a higher tumor mutation load following prior treatment with temozolomide was a significant factor for the tumor’s response to CPI treatment (42). Whether mutational burden or alternatively CTLA-4 expression is related to CPI treatment response in these tumors deserves further investigation.