Macimorelin as a Diagnostic Test for Adult GH Deficiency 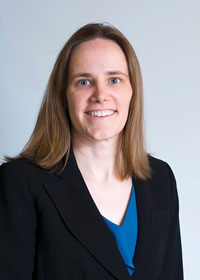 The evaluation for growth hormone deficiency (GHD) is an important step in the management of adults with known or suspected pituitary disorders. Growth hormone (GH) replacement has been shown to have positive effects on body composition, muscle mass, bone density, liver health and quality of life (1). However, GH replacement is an expensive therapy and carries the burden of daily injections for patients. Thus, accurate diagnostic testing is critical to identifying patients with true GHD who may benefit from GH replacement.

The insulin tolerance test (ITT) is considered the gold standard test for the diagnosis of adult GHD. However, this test requires induction of hypoglycemia and is thus contraindicated in the elderly, those with seizure disorders or cardiovascular disease. Growth hormone releasing hormone (GHRH)-arginine testing was previously available in the United States for testing of GHD, which offered an alternative testing procedure with established cut-offs stratified by body mass index (2). However, GHRH was withdrawn from the U.S. market in 2008, although it is still available in other markets. Glucagon stimulation testing has remained as a viable alternative to the ITT in the U.S., however, it requires an IM injection, 3-4 hours of testing time and can cause nausea and vomiting (1,3-5).

CASE RECORDS OF THE MGH NEUROENDOCRINE AND PITUITARY TUMOR CLINICAL CENTER: When Do Prolactinomas Require Surgery? 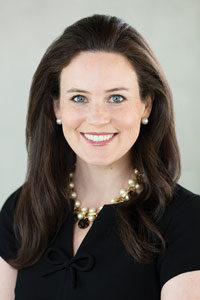 A 22-year-old man presented to MGH Neurosurgical and Neuroendocrine and Pituitary Tumor Clinical Center with headaches and visual loss. He was referred by his ophthalmologist, who documented a temporal field defect with a dense right central scotoma.? He had first noted near blindness in his right eye 2 months prior to presentation at his annual physical when he decided to test himself on the eye chart.? He was then seen by an ophthalmologist who found right optic neuropathy and visual field testing consistent with severe right junctional scotoma and right afferent pupillary defect (Figure 1).

Besides decreased vision, he reported headaches attributed to migraines for the prior 6 months.? He endorsed limited libido, he did have facial hair, but did not think his voice had deepened with puberty.? He had been overweight and hypertensive since childhood.

On exam, he was obese but did not appear acromegalic or Cushingoid. There was a dense right central and superior temporal defect, and no detectable visual field abnormality on the left. Acuity was 20/15 on the left but he was unable to read an eye chart or count fingers with the right eye and left pupil did not react to light shone into right eye, consistent with afferent pupillary defect. 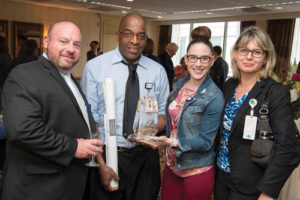 The Massachusetts General Hospital Neuroendocrine and Pituitary Tumor Clinical Center won a Patient Experience Award based on the actual ratings given by patients and their families. It is a recognition of all the hard work of the team throughout the year to make the patient experience responsive and compassionate. The photo depicts William McLaughlin III, Rodney Lomax, Jessica Spallone and Agata Litra, receiving the trophy at a Hospital ceremony.

Patients may qualify for research studies in the Neuroendocrine and Pituitary Tumor Clinical Center.? We are currently accepting the following categories of patients for screening to determine study eligibility.? Depending on the study, subjects may receive free testing, medication and/or stipends.

Dr. Mabel Toribio earned her medical degree at the Johns Hopkins University School of Medicine. She then went on to complete her Internal Medicine residency training at the University of California, San Francisco; and her Endocrinology fellowship training at Massachusetts General Hospital. Dr. Toribio sees patients with neuroendocrine and pituitary disorders at the MGH Neuroendocrine and Pituitary Tumor Clinical Center and sees patients hospitalized at MGH through inpatient consultations. Additionally, she performs clinical research at MGH and provides teaching to medical students, residents, and other trainees at MGH and Harvard Medical School.